Hello everyone! I hope you all had a wonderful Memorial Day and fun three-day weekend.

We sure did. My crazy, high-energy toddlers can be challenging (aren’t they all?), but they really crack me up. The entertainment value alone makes it all worth it, so I thought I’d share some of the highlight reel: 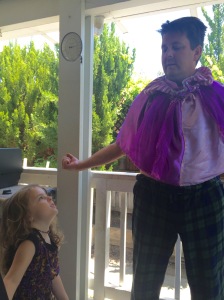 John: Can I wear your dress today?

John: No, I look awesome.

Brontë: NO, you’re too big. That’s for GIRLS. MOMMA, DADDY’S TRYING TO WEAR MY PRINCESS DRESS!

Notice my daughter’s look of unbridled toddler outrage. Not only is her dad taking her dresses without asking, he’s  getting boy cooties all over them.

Battles for Violet the Lizard

We went to a cousin’s birthday party at John’s Incredible pizza. I told my husband he should demand free entrance because the sign says it’s his place, but no one else thought the idea was funny. And rightly so.

Turns out my husband has mad skee ball powers that gave us a cheap toy return on our entrance fees. As if by magic, he dropped a ball straight into the 300 ticket slot. He claims it was pure luck, but I think he’s just being modest.

After playing a variety of arcade games and collecting tickets, we went with the kids to the ticket redemption center so they could pick out some stuff. They selected two miniature Army guys with tiny parachutes, two kazoos, and one plastic lizard.

Brontë named the lizard Violet (after my cat) and she quickly became the most sought-after toy in the house. Brontë and Bridget fight over turns with Violet, pretending to brush her hair, read her books, carrying her around in a plastic cat carrier, and wearing her on their shoulder while they eat dinner.

They even built her a lizard castle, which also functioned as a sister fort.

Finally one evening, I caught Brontë quietly staring at Violet. Brontë lightly poked her a couple of times then looked at me, concerned.

“Mom? I think there may be something wrong with this lizard.” Brontë told me as she kept poking her. “She isn’t moving. We may need to take her to a doctor.”

Profanity At The Zoo 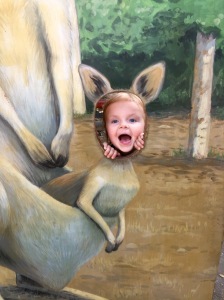 We also had a terrific time at the zoo, checking out all the different animals and running around like mad.

I even learned something new. We were standing next to some zebras when one of them got worked up about something and started yelling. It sounded A LOT like a donkey.

I’ve never heard a zebra make noise before, but I didn’t expect to hear donkey calls. I thought zebras would sound more like warbling deer. Now I can’t help but see zebras as nothing but donkeys wearing elaborate striped outfits.

The kids were having so much fun, in fact, that we didn’t notice the time flying by. And right as an employee finally walked up to us to politely tell us the zoo was closing, Brontë stopped suddenly, looked at me with enormous eyes, and said, “MOM, I REALLY, REALLY NEED TO GO TO THE BATHROOM.”

We immediately rushed over to the nearby restrooms because when a four-year-old tells you they need the bathroom, it’s urgent. John and I were negotiating who would look after which kid when the zoo employee told us to all just go in together since everyone else had left anyway.

So, we all walked into the bathroom together as Brontë beelined to a stall. She scrambled onto the toilet seat while dropping her drawers… and two baseball-sized turds rolled across the floor.

Brontë looked down, threw both her arms in the air, and shouted:

“Well SH*T, looks like I just crapped my pants!”

John, sensing I was about to break, heroically rushed over to help as I quietly left the bathroom to go into hysterics. You don’t want to encourage your children to have potty mouths by laughing when they swear, but it was just… 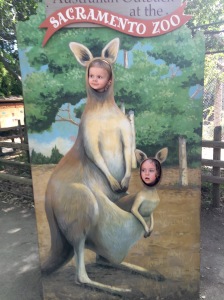 SO FUNNY. I don’t know how my husband held it together. Her enunciation was perfect. Her arms gestures added just the right emphasis and if crapping your pants isn’t the perfect situation for using the S-word, then I don’t know what is.

I walked back in after collecting myself and helped get everyone out of the zoo. John and I told Brontë she shouldn’t be using the S word but tried not to make a big deal out of it, because flipping out seemed like handing our kids detailed instructions on how to really get a rise out of adults.

My cousin related this little gem to our grandmother, who called the toddler use of the S word an “abomination.” That seemed like a strong word to me.

Fortunately, no one saw or heard any of this: neither the toddler S bomb, nor the rolling turds. I’m not entirely sure whether we just spared humanity from this scene or if everyone else was robbed of the joke.

But I hope everyone else had a fun weekend too. Happy Memorial Day!