Whoever came up with the idea of offering play structures at McDonalds and Chick-fil-a’s was a marketing genius, let me tell you. It’s an absolute godsend for parents of toddlers to finally eat a meal in peace.

Problem is, I don’t want to spend the next several years only eating at McDonalds every time we go out to dinner. Really seems like someone would’ve caught on  to the screaming market need for reasonably healthy restaurants with kid play structures by now…

Because every time my husband and I try to eat at a “normal” restaurant, it’s just a matter of time before our kids turn into drunken soccer hooligans. They kick, they squirm, they take turns melting under the table, and when our scrambling to control them finally frustrates them enough, they start screaming at the top of their lungs.

The  crayons restaurants give you are a great idea, but they only work on our kids for a few minutes (plus, Bridget eats them). Bringing toys hasn’t worked. Stern lectures in the bathroom haven’t worked. And since our society currently frowns on paddling the crap out of your kids, my husband and I can think up few solutions beyond one of us marching our kids outside, around the building, while the other one eats by themselves.

Threatening to leave is pointless, because kids DON’T CARE. They don’t understand what it means to work long hours to earn the money for a nice meal at a restaurant and they think leaving is a fine idea. Who wants to sit still?

Recently, my husband and I decided we HAVE GOT to put a stop to these shenanigans, because 1) we don’t want to live under house arrest for the next five years, and 2) we’ve been to Europe and seen little kids sitting patiently at dinner many times. So, we know it’s possible.

We just don’t understand how.

We’re assuming the best course is practicing proper mealtime behavior at home, which means teaching our kids to sit still in their chairs at the dinner table. We used to excuse them when they were finished eating, which usually meant they took two bites before running off to build Lego ships and make Barbies yell at each other.

Now, they’re supposed to sit still until EVERYONE is finished eating, which is going something like this: 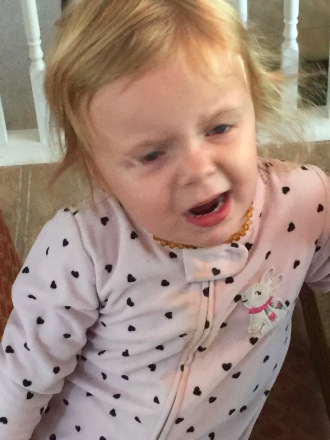 Our kids are firmly convinced they’re suffering under an oppressive and torturous dictatorship. The new policy changes have prompted rioting and vocal dissent, as well as the constant flickering on-and-off of nearby light switches:

But to no avail. Their butts keep getting placed firmly back onto chairs and the timeouts just keep on coming.

The whole process has about shredded our every last nerve, but as time wears on, the tantrums are getting shorter and the sitting is getting longer. Dare we even say it?

Actually be able to take our time when eating at a normal restaurant.

Any other parents have this problem? Did you manage to fix it, or did you end up hiding out for years until your kids came of age? We think we may be on the right track here, but only time will tell.

5 thoughts on “When Your Kids Are Obnoxious in Restaurants”