Argh… after a few months of being super busy and letting the blog slide, I finally started writing again when BAM! Germs snuck up and slapped me down for the count…

It’s been a real pain, actually. This year has been a bad year for illness in general and we just moved to a new town, right next door to a daycare. Brontë just started Kindergarten and we’d all been passing some kind of cold back and forth to each other and the neighbors, every few weeks.

So I didn’t think much of it when I was feeling crappy around the girls’ birthdays and I rallied because, well… because you’d jump on a grenade for your kid, so you definitely rally for your kid’s birthday party.

But I was feeling worse and worse as my date for a minor surgery approached. Again, I tried to rally because cancelling would be super inconvenient: John had saved up time off work, the neighbors were helping take Brontë to school, the girls had Spring Break lined up the next week…

And that’s when my temperature spiked to 104 degrees and I stopped being able to eat anything for days on end.

Even coffee. Coffee was the real insult because it added a killer caffeine-withdrawal headache to the whole mess, and though I tried to fake it and go in anyway, the anesthesiologist took one look at me and said we were gonna have to reschedule.

Well, turns out I had pneumonia and I’m glad it wasn’t anything worse (pneumonia is nasty but I’ll get over it). I’ve been on powerful antibiotics for the past couple of weeks and am starting to feel much better, though bummed that John burned his time off, that I’m going to take a couple more months off at the gym, that I’ll have to lean on neighbors and grandparents even more…

But if there’s any silver lining to this whole deal, it’s that John had to do my job for a couple of weeks. Fearing my reaction should I eventually come out of the fever to an exploded house, he attempted to not only keep the the kids alive, but keep the house reasonably neat.

And the weekly highlight of all that had to be watching him flip out about the kids dumping one more armload of toys on the living room floor while he was trying to vacuum it. He was just shaking his arms, like a crazed muppet, yelling “DO YOU NOT SEE THAT I AM VACUUMING THE FLOOR RIGHT NOW? PICK UP YOUR TOYS AND PUT YOUR SHOES IN THE DAMN SHOEBOX!”

Oh, it was SO gratifying to watch, I can’t even tell you.

Why? Because it’s normally ME waving my arms and yelling about shoes while he gives me the side eye, wondering when exactly I lost the plot. He didn’t understand why we needed the shoebox in the first place.

“It’s cluttering up the entryway,” he once said. “Do we really need that? [Sees my face] Okay, okay… sheesh. “

Fast-forward to last week, and suddenly he’s reorganizing the shoebox even harder and asking Bridget:

“WHERE are your shoes? WHY ARE THEY NOT IN THIS BOX RIGHT NOW?” 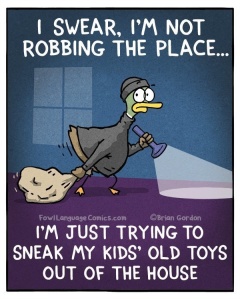 Because now he gets that when you’re wrangling wild kids out the door in a hurry, not-having-shoes creates an extra twenty minutes of shoe drama that means your kid may be late to Kindergarten and suddenly you’re the flake who probably day drinks. God help you if you’re supposed to pick up another kid for carpool. (Oh, and it’s tantrum time now because you’re putting out stress vibes… kids sense your energy, you know.)

He no longer thinks I’m insane for flipping out about people piling dirty dishes on the counter every day when the dishwasher is empty, because now he gets how crazy-making it is to clean up after grownups after spending your entire morning clearing out toddler detritus. Now he gets why I started piling his dirty socks and coffee cups in his closet after using my words kept failing to make my point.

Because taking care of little kids is a lot tougher than it looks. You never get promotions or positive performance reviews, and you basically have three options:

It’s that last part that can kill your sense of humor if you’re not careful.

It’s not the daily maintenance stuff that really gets to you. Feeding your kids, bathing them, dressing them, guiding them, helping them learn… that stuff needs to be done and comes with the territory.

Nah, it’s the extra, made-up, pointless stuff like watching them spin around the dinner table, flinging 600 grains of rice onto a rug you’ve already vacuumed twice. It’s the covert sibling torture tactics, where they wind each other up just to watch the other get into trouble. It’s that phase where Brontë would tear long scraps of paper from library books and eat them because I don’t know kids are nuts that can’t taste good for the love of all that’s holy STOP EATING LIBRARY BOOKS THAT HAVE PROBABLY BEEN SMEARED BY EVERY SNOT-DRENCHED TODDLER FINGER IN THE COUNTY AND NOW WE HAVE TO PAY FOR IT…

Yeah, I got to sleep through that for the past two weeks, occasionally waking to watch my husband flail his arms around and shriek about finding one more My Little Pony stuffed into the couch.

Because he’s a trooper and I love him and he did a great job.

And now he puts his dirty coffee cups into the dishwasher.